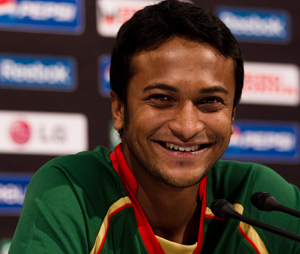 Bangladesh all-rounder Shakib Al Hasan, who is currently serving a six-month ban due to disciplinary issues, has regained the top spot in Test rankings.

The 27-year-old, who had lost his place to Ravichandran Ashwin of India last November, returned to the pole position following India’s recent 3-1 Test series drubbing by England. Ashwin, now holding the second position with 357 points, accumulated total 106 runs and picked up only three wickets in the two matches he played in the five-match series.In 34 Tests since Shakib’s Test debut in May 2007, he has scored 2278 runs at an average of 37.96 and taken 122 wickets at an average of 33.39. Shakib was at 364 points since he played his last Test in February against Sri Lanka.The left-hander was banned from all forms of the game on July 7 for what Bangladesh Cricket Board (BCB) described as a ‘severe attitude problem’.