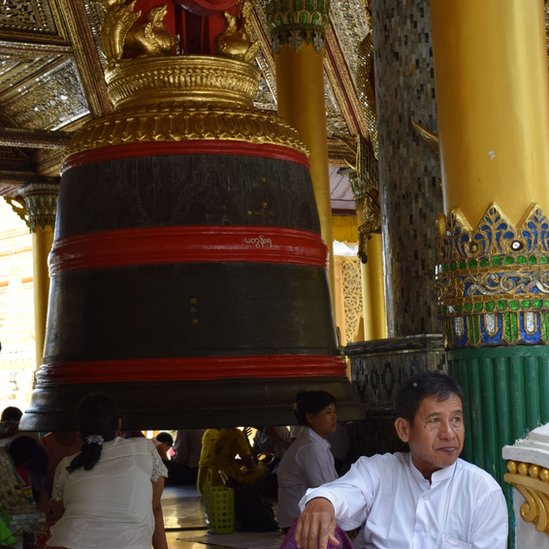 The fate of the Dhammazedi Bell is one of Myanmar’s murkiest mysteries and for some Burmese a lifelong obsession. Four centuries after the world’s biggest bell was last seen, a new salvage attempt is under way in Yangon (Rangoon), and it’s attracting large crowds.

Cast in the 15th Century, the Dhammazedi Bell was according to popular legend placed alongside the gleaming gold Schwedagon Pagoda, the most sacred Buddhist site in Myanmar(also known as Burma).

Said to have been made of copper, gold and silver, the bell is said to have weighed nearly 300 tonnes (661,400 pounds). It’s mindboggling figure, about the same as 25 double-decker buses. Then in 1608 disaster struck.

The Portuguese adventurer and mercenary Filipe de Brito seized the bell with the aim of melting it down to make cannons. He had it dragged to the Pegu (now Bago) River and loaded on to a raft, at which point, not entirely surprisingly, it sank.

In the years that followed the legend of the bell has endured, and recovering it has become a point of both Buddhist and Burmese national pride. There have been at least seven serious attempts in the last 25 years.

Some have involved international teams and sophisticated underwater equipment, but to date no one has been able to accurately pinpoint where the huge bell is. That’s not diminished enthusiasm among the public.

More than $250,000 (£150,000) has been donated towards this latest attempt and every day hundreds of spectators gather on the banks of the Bago River eager for the latest news. Many sit for hours huddled under umbrellas, shielded from both the hot sun and the regular deluges of monsoon rain.

“I don’t know exactly where it is, but there’s enough in the historical records to say it [is] out there, we’ve just got to find it,” one retired railway worker said, a well-thumbed leaflet on the Dhammazedi Bell clutched in his hand. Others peer through shared binoculars, desperately looking for some clue from the murky waters.

“I can’t see much,” Htein Lin, a businessman said with a smile. “But if we do find the bell our country will be famous all over the world. That’s why I’m so excited – I really hope they find it.”

Those seeking even greater thrills pay 1,000 kyat ($1; 60p) for a trip out into the river and a quick tour of the search operation.

If they’re expecting to see sophisticated technology they’ll be disappointed. There’s a dredger and a houseboat but two old wooden vessels are being used by the diving teams. Operations are being guided not by GPS or advanced maps but a monk sitting on top of one of the boats.

From a distance it seems painfully inept. We watch as young men in T-shirts put on simple diving masks before leaping into the water clutching a hosepipe for air.

The river current is fast so after a minute or two they re-surface and are hauled back on to the boat by rope, before starting all over again.

This is a search that has put its faith in the supernatural, not science. “If we just rely on modern technology we will face more problems,” says San Lin, the leader of this salvage attempt.

He believes that Buddhist “nats” or spirits are preventing the bell being found and that only the spiritual approach that he advocates can locate it. “We must use our traditional ways so that the dragon spirit does not keep hold of the bell, ” he says.

For many Burmese academics San Lin’s approach is an embarrassment, and they would like to see teams with better equipment allowed in. Last year a team from Singapore with a budget of $10m declared themselves ready, but they’re still waiting for final approval. Historian Chit San Win has spent most of his life researching and writing about the Dhammazedi Bell, and following the failed salvage efforts.

When I meet up with him at the Schwedagon Pagoda he lays his maps on the floor and tells me that both the Yangon and Bago River’s have changed course in the last 400 years, making it almost certain that the search is in the wrong place.

More worryingly, having scoured Burmese literature for supporting evidence of the Great Bell he now has serious doubts as to whether it ever really existed. “I really hope that the bell is real, it would make me so proud of our country,” he says.

“But if we look at the three main Burmese history books written 200 years after the Bell sunk none of them mention it.” Undeterred, this latest team say they will keeping diving for another two weeks. They have no doubt that Myanmar’s holy grail is down there somewhere in the mud.