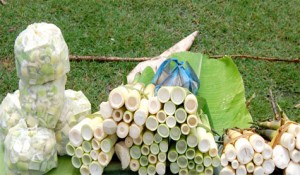 Bamboo plants are treated as regular vegetable to tribal in Chittagong Hill Tracks (CHT) and collected by the locales which made bamboos vanished.

Young bamboos become top listed vegetable to them. However, it is also in the top of menus of tribal-owned renowned restaurants and hotels. High demand of young bamboo throws its’ life in danger. Thus, bamboos are now nearly endangered in these three hills due to its locales food-chain which may cause extinction of bamboo in hills.

A huge number of bamboos grow in three hill tracks. KPM established and operated on the basis of these huge natural growing bamboos.

In earlier period, KPM authorities collected huge number of bamboos from these three areas to manufacture paper. At the same time it was distributed commercially to other districts as per requirement. Employment as well as earnings came from these commercial distributions.

Demand of paper increased with boosted up population. But, the paper manufacturing process is collapsed due to insufficient raw materials (bamboo).

The shortage of bamboos identified by the authorities, that is, young bamboos are destroyed by the tribal.

Pollination is another reason of shortage of bamboo. Each cane in a mature colony of bamboo will flower at the same time. Bamboos will flower once at least every 50 years. In any case, flowering produces masses of seeds, typically suspended from the ends of the branches. These seeds will give rise to a new generation of plants that may be identical in appearance to those that preceded the flowering, or they may produce new cultivars with different characteristics, such as the presence or absence of striping or other changes in coloration of the culms. Last few years, bamboos are disappearing caused by flowering which is also a characteristic of bamboos.

Authority should take necessary action to save bamboos in CHT, concerned demanded.