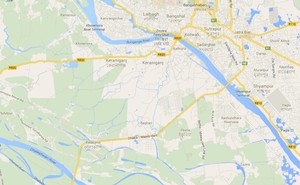 Four persons, including the driver of a microbus, have died when their vehicle collided head-on with a bus at Dhaka’s Keraniganj.

The Mawa-bound microbus was hit by the ‘Ilish Paribahan’ bus, which was on its way to Dhaka, said South Keraniganj Police OC Jamal Uddin Meer. Police said six more were injured in the accident that took place at Abdullahpur on Dhaka-Mawa road around 3pm Saturday.

Two women and a child died on spot while another person succumbed to his injuries at the Dhaka Medical College and Hospital (DMCH).

Police assumed he was driving the microbus. His body has been sent Sir Salimullah Medical College morgue.

The dead were yet to be identified. Police believe they all were travelling in the microbus.

Among the wounded ‘Shilpi’, ‘Shaukat’, and ‘Sentu’ were admitted at the DMCH and ‘Ima’, Sadia Akhter and ‘Lima’ at Mitford Hospital.