One dead and four injured from different terrorist attack at Khagrachac 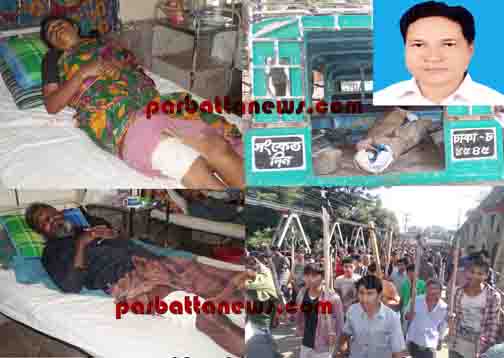 A spontaneous hartal was observed at Manikchari and Panchari. From the cock-crow picketers were took place at Shapla Chattar, bus terminals and important areas and blockade highways. Shops, business stores, schools, colleges were shuttered down. It seems all were stand under a same umbrella, anti-terrorist movement.

One dead and four wounded from different attacked at Khagrachari on Saturday evening. These terrorists’ activities were happened in three Upazilla, surprisingly at the same on Saturday at 7 PM. Indignation smoldered in these areas. Community people demonstrate on Sunday and called hartal from Monday 6 AM to Tuesday 6 AM demanding arrest and make sure their punishment under law.

Chingsamong Chawdhury (42) died at gun shot was vice-chairperson of Upazilla Awami League on the occasion. Professionally he was a head teacher of a school. Mongsajai Marma known as Japan, Manikchari JSS chairperson was wounded by this attack. He has sent to Chittagong Medical College Hospital.

School students of Manikchari Upazilla made a road barricade as their support against terrorism. All were showed their respect and support against terrorism. They shuttered down their shops, businesses and daily financial activities to confirm their support on anti-terrorist activities. Police and Army found five rounds of used bullets cover of China Rifle from the spot though no one was arrested till the news was written.

Sunday morning at 11, Bangladesh Marma Unnoyon Sangsad arranged demonstration and movement against the incident. They blamed UPDF for this incident. When these people started to march to UPDF Khagrachari office, police stopped them and clash between demonstrators and police arose. Demonstrators made a chaos and vandalized three CNG, business shops, art gallery, guest house and many more near the area. Source said these chaoses were made by Marma community.

However, UPDF representative Michel Chakma denied the accusation and said, murder, whoever made this is shameful. To implicit UPDF with this murder is disgraceful and unwanted.

On the other hand at Panchari, Ramzan Ali (55), his wife Anwara Begum (40) wounded at gun shot at the same time on Saturday. This couple was rescued by police and locales and was sent to District General Hospital. Perseveres said, criminals first shot Ramzan Ali and then his wife to flee away and both were shot before the right knee.

Ashutos Tripura (26), another casualty who was shot by terrorists at the same date, same time was JSS leader of Manikchari lived in Bhuyanpara at Matiranga. To control over the land, this was happened, guessed by locales. Three terrorists on a motor bike suddenly attack Ashutos when he was on the way to his home at Matiranga Bazaar. After the attack, locales took him to CMC hospital.