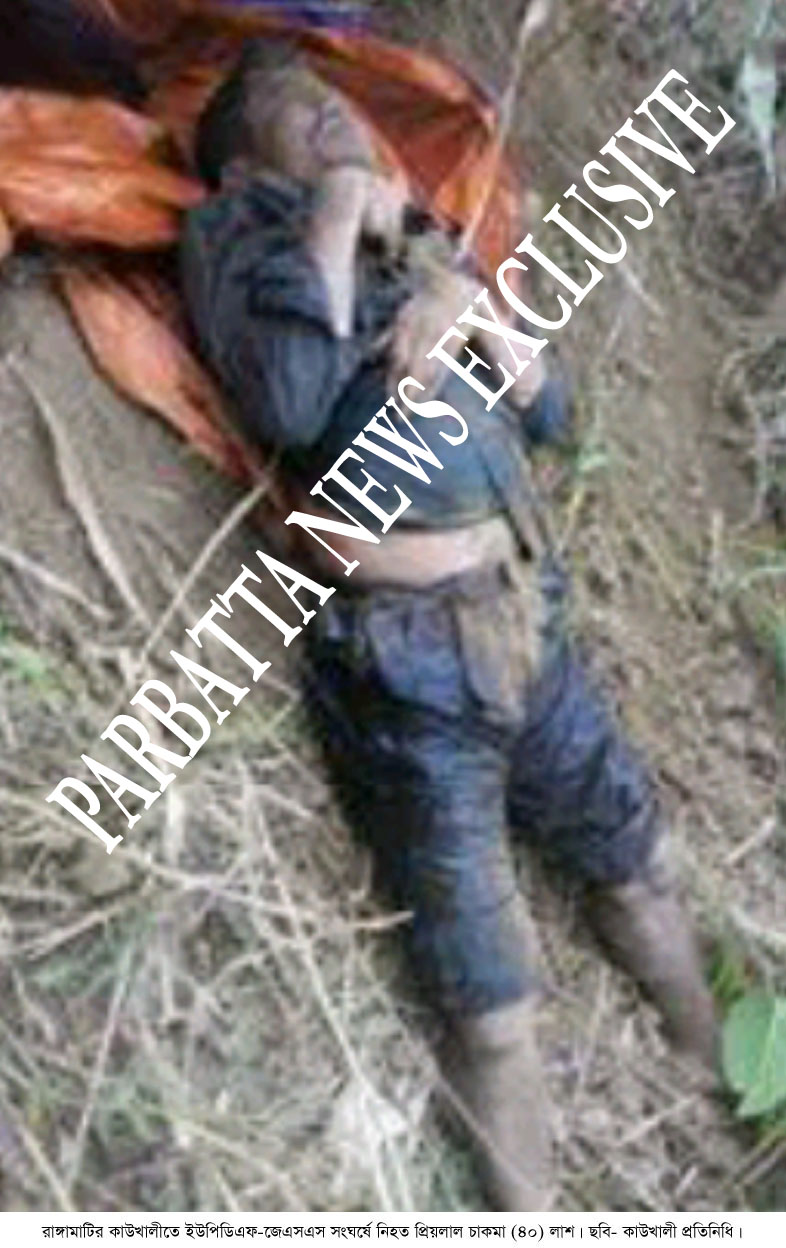 Ariful Haque Mahbub from Kowkhali:
In Rangamati, on establishing supremacy over each other, armed members of the two warring parties JSS and UPDF fought a bloody gun-battle that claimed 3 lives and wounded at least 5. They exchanged several rounds of bullet and used heavy fire arms. The reliable sources said hearing the sound of firing the patrol troops rushed to the place and after attacked by the terrorist groups, they opened fire on them.
The terrorists at last fled to into the deep forest. Nilu Kanti Barua, Officer-in-charge of Kowkhali Police Station said to parbatta news correspondent that on March 3, the gun-battle held at dead of night at Jibtali Furman frontier area. They fought whole night and Russel Chakma(32), inhabitant of Jurachari,Priyolal Chakma(40),son of Umesh Chakma, inhabitant of Ramharipara under Naniarchar police station and unknown one, all members of JSS, were killed. 5 members were bullet wounded fatally while two dead bodies were taken away but one body was seen untouched for two days on the place, the locals claimed. The two bodies were later burnt as per religious rituals.
A team of police personnel led by OC Kowkhali Police Station, reached the place of occurrence and found several documents of battle-fight. Latest news is that the OC did not able to identify the dead body’s identity. He accused that the locals are not cooperating him to identify the body. Male inmates are on run; so all the houses became
houses of women and children only. They are not ready to open their mouths for fear of assault. Besides, news of police coming creates panic among the mass people. Even the women and children are seen to flee in safer place as they think. Leaders of JSS and UPDF have given comments in different way in this regard. JSS kowkhali Upazila president Suvas Chakma said that the area is thickly populated with UPDF members and supporters. The clash might have happened due to their internal conflict. JSS is not entangled with this, he added. UPDF Kowkhali unit Coordinator Rahel Chakma said his party has no connectivity with this bloody fight. But the independent sources commented that usually armed men both in two parties fall into bloody clash. And they blamed each other for that clash.