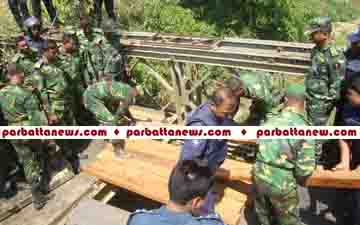 Staff Reporter:
Janasangati Samiti JSS president and Parbotta regional Council Chairman Santu Larma on visit to Bandarban March on 11, 12, clashes erupted between Bengalese and hill people in the township. On Wednesday, the two groups’ clash held at Balaghat in the township leaving 20 injured. Police instantly arrested one. Army and BGB contingent began to patrol after this incident. Amidst tense, on 4-day visit, Jotirinda Bodhypriya Santu Larma arrived Bandarban at noon to join the Pahari Chattra Parishad conference on Wednesday.

Fatally wounded Rocky Tanchanga(18), Paeoaungpra Marma(40) and MaungThoeo(50) were sent to Chittagong Medical College Hospital. On the other hand, activists of Jago Parbottabasi participated sit-in program at different points of Rangamati –Bandarban highway and they uprooted a portion of Brail Bridge near Sarnamandir area and blocked the highway by placing wood-limbs for stopping plying vehicles. At this, the passers-by especially the school and college-going students suffered a lot.

Later police along with the assistance of army lifted all the obstacles and place the brail bridge in right track and allowed Santu Larma to enter Bandarban. Besides, police charged and chased the members of Jago Parbottabasi at Balaghat,Kalaghat and Memberpara for avoid untoward situation more. To control the volatile situation, district administration, by this time, deployed two platoons of BGB and troops along with additional police forces.

District Police Super DEbdas Bhatyacharya informed the newsmen that the situation is under control heightening the security measures. On the contrary, leaders and activists of Jago Parbottabasi engaged to continue their agitation by staging rallies and demonstrations at towns Bangabandhu Muktamancha. It is mentionable that the Jago Parbottabasi on Tuesday at a press conference, called a 72-hours shut down (HARTAL) in protest of SANTU LARMA’s visit to Bandarban and rise of abduction, illegal levy real, killing and insurgencies in hill region.