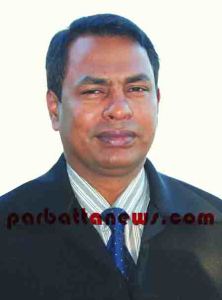 On Monday afternoon while he was inspecting the site of Rangapani area in Rangamati, the miscreants jumped over him and tried to force him to go with him; but all on a sudden, locals and police rushed the place and saved him. The miscreants snatched key of his car, key and mobile and fled before catching them. Later Upazilla vice chairman Palash Kusum Chakma rescued car, key and mobile and gave them. While contacted, Jahangir Kamal said he visited the area every now and then for viewing construction work; they used to disturb me for frequent levy. Once I paid them the levy, still they were frequently coming to me and demanding levy. Not only police, army personnel also helped me to rescue the missing materials I possessed.