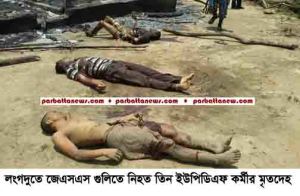 Staff Reporter:
4 hill terrorists were killed while the two armed rival tribal groups exchanged fire at Kharikata village under langadu Upazilla in Rangamati district . The all deceased were identified as activists of UPDF. According to sources, on Sunday morning at 6 am, the two terrorist groups began to battle and the two groups were identified as UPDF and Jana Sangati Samittee. They exchanged 15 to 20 round bullets.

The deceased are: Rupamaya alias Sujoy Chakma (25), Anik Chakma (28), Sumon Chakma (25) and Abhijit alias Yuddhamani Chakma (29).According to source, the terrorists later set fire to a house and looted the arms and ammunition. A mother and a child have been missing from that time.

However, the police raided the spot and found the three bodies. These are: Sujoy Chakma (25), Anik Chakma (28), and Sumon Chakma (25). Among the dead Phulamani Chakma was identified as father of Anik Chakma; they both are the inhabitants of Kowli area under Langadu  Uoazilla. Killed Rdumani’s home is BaraKowli, his father  Turamani Chakma  was killed at  the spot that located as Gellachari. Rupamaya Chakma’s father is Rustom Chakma; their home is also at the spot area. The other killed person is Sumon Chakma whose house is located at Karalchari village under the Sabegkhang union of the same Upazilla. 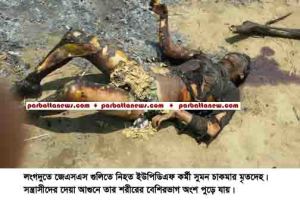 Eyewitnesses said, Sumon Chakma was killed and shot at his mouth and body that fatally fractured. His wife and son were at the scene at the time, they said that a group of four olive-colored clothing persons came to their home and began to shoot him and set fire on the house.

UPDF leader Michael Chakma confirmed the deaths. He accused those are Santu Larma’s armed cadres who are responsible to shooting incidence. He said, a number of their employees were available at homestead at the previous night. They came under attack during the JSS terrorists’ brush fire

The JSS leader Sajib Chakma denied the allegations,  arguing that UPDF members were killed perhaps for their internal conflict.
Langadu Sadar police station’s OC said the area is their farm area. We have learned that three people were killed. Our forces went to the spot. Meanwhile, we have received three dead bodies. Their bodies were being taken to the police station.
Sadar union chairman Sukhomaya told parbattanews  I  was  visiting the spot and found only 3 bodies.