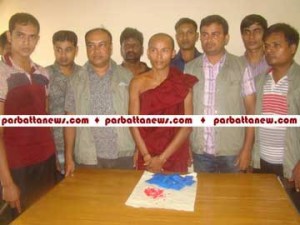 Joint forces nabbed a Buddhist monk with 2 thousand and 7 hundred 45 pieces of yabba who was in guise at Hilbert residential area in Bandarban Township.

On Wednesday, on having a secret information, DB police and intelligence organization NSI carried out a joint operation and caught him red handed. He is identified as Wa Nasara(33). He is the son of Thowaichar, an inhabitant of Lama upazilla. Forces found the tablets Blue in color near him.

Buddhist Monk confessed Shaihalang Murma of Liragapara under Boangchari Upazilla gave him these tablets. He asked him to sell each tablet at taka 55 to 100. He educated at Gouhatti in India. He resides now inside a Buddhist temple at Gozalia Combonia under Lama upazilla. He is the active member of Janasanghati Samittee JSS.

Law enforcers said, his talking and behavior is as like as the citizen of Myanmar. He in the guise of Monk has been trading Narcotics so long. He confessed many are entangled with him in this trading.