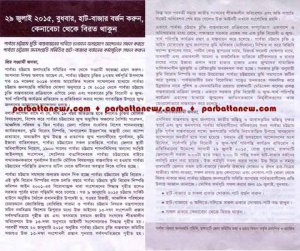 Finally, Jana Sangati Samittee JSS chairman Santu Larma announced non-cooperation movement program to realize his demands. As a part of the announced program, he declared shutdown program for 12 hours on July 29 in Rangamati district. Under this program, hat, bazaar boycotting would be included. In a circulated leaflet, Santu Larma anounced the agitation program on Wednesday.

According to the leaflet, for the interest of preserving the existence of the Jumma people and  saving their lands including the full implementation of CHT treaty, JSS compelled to go on lawful agitation movement. As part of the ongoing non-cooperation movement, JSS called 6: 00 am to 6:00 pmdawn to dusk shutdown on July 29.

In order to succeed the program all shops selling and purchasing would be stopped, the press release stated except emergency medicine selling-purchasing task.

Here it is mentionable that Santu Larma on December 3, 2014 at a press conference arranged at Hotel Sunderland in capital, declared April 30, 2015 as a deadline to materialize JSS demands; government failed to respond to positive direction within the scheduled time. At the press conference he also declared thay if government failed then they would go on agitation from May 1 and accordingly they performed the program and now they compelled to go on broader agitation like non-cooperation movement the press release added.

The movement is non-violent or violent in any way he could be, he said in response to questions from journalists. As a result of the Chittagong Hill Tracts, and drew criticism was widely discussed at the national level.

However the government though responded nothing at the agitation program of JSS, the hard-line group, pro-reform, began to criticize the latest initiative of Santu Lama, Most of the time he passed silently, they commented.  The opposition especially the UPDF is now face to face of JSS, the social media added.