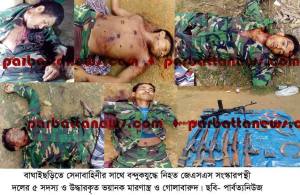 The biggest weapon recovery by army men were accomplished in Rangamati, the Chittagong Hill Tracts after signing the Peace Accord in 1997. 8 deadly weapons, including Machine Gun, SMG, SLR 5 hundred 39 rounds live bullets were recovered after occurred a fierce fighting between security forces and UPDF armed terrorists, though earlier the terrorists were identified as JSS reformist group’s armed cadres.

Witness said, this is the Biggest gun fight and arms recovery by Bangladesh Army  in CHT history after signing peace accord.  The peace accord was signed in  2nd December 1997.

Here 5 terrorists were killed. One corporal was wounded and he was sent to Combined Military Hospital in Dhaka by helicopter. The arrested people are identified as innocent house owners after interrogation and later they were freed. The UPDF has denied its involvement in this incident by sending a press release to local media.

Sources said on Friday night, on secret information about assembling the armed terrorists, the troops along with the combined forces at the directives of Khagrachari Regional Commander Brig. Gen. S M Mahbubul Islam, Baghaichari zone Commander Lt Colonel Haidar advanced leading the joint forces to Baghaichari’s Baradam area and escorted them early in the morning before disbursal to carry their operations.

According to sources, a large group of terrorists on reform JSS armed terrorists were preparing to carry on a large-scale operation to different targets what they set earlier.

Baghaichhari zone commander Lt.Col. Hayadar told parbattanews that the terrorists took shelter at the residence of a local, Binoy Jyoti Chakma and were preparing to go on operation to different areas. They began to use civilians as human shield, but the joint forces carefully isolated them for saving the lives of the civilians. Terrorists were 20 in number, but the others managed to escape.

Baghaichari police chief Zakir Hossain Fakir confirmed the news. However, he told the parbattanews that he had just finished the inquest report. The report will be sent to Khagrachharhi. One of the victims house is Langdu and other’s house is at Sajek, the police officer added.