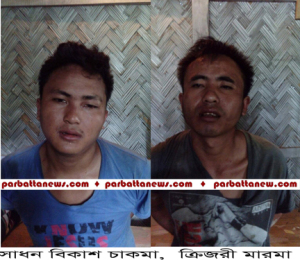 Two tribal toll collector and terrorists were held red handed while they went on realize the toll from the locals at Bhaibonchara in Khagrachari on Tuesday noon. Security forces on having secret information, carried on search operation on that area and found the two tribal terrorists.

Sources said security forces recovered taka 9 thousand 8 hundred and 73 in cash from them along with a receipt book. Arrestees are Krejebi Marma (32), a member of JSS reformist group and Sadhan Bikash Chakma alias Sadhu(30), a member of UPDF.

Eyewitnesses said they were then loitering at Satero Number area, Sadhan is the son of Mangal Raj Chakma. His residence is Dairampara under the Bhaibonchara of Sadar Upazilla. Krejebi Marma is the son of Ugnai Marma who living at Garjan Tila.

Security forces are now searching to recover the missing Light Gun. Cases were filed against them with the local police station.