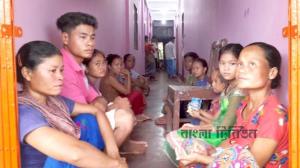 At least fifty families have reportedly left their homes in face of violence and threats from the local terrorist groups at Betchhara in Rowangchhari upazila of Bandarban district.

Many of them have now taken shelter in 10 rooms of a local hotel in Bandarban town, where eight to ten people are living in each of those two-seated rooms.

According to the victims, more than 70 people out of around 130 people who left home, are staying at the hotel. The rest of them went to their relatives’ house or other places.

Police, later, arrested Bimal Chakma from the scene with arms.

Following the arrest, the terrorist groups attacked and ran rampage in Talukderpara under Tarachha union in Rowangchhari blaming the locals for informing police.

Angered at the police intervention, the terrorists also threatened locals of killing.

Aung Thoai Pru Marma, one of those who took shelter in the hotel, said they were in a sorry condition.

“We don’t know when we could return home,” he said.

However, most of those who left their homes were too afraid of further attack to give a further detail on the incident of terrorists attacking their neighborhood.

Mong Pru Marma and Ume Pru Marma said we can’t explain how we are spending our days here.

Uching Pru Marma said at least 15 people were threatened of death at Betchhara area after they left the area.

There is only one police camp in Betchhara area.

Police say several terrorist groups have been involved in crimes like extortion, kidnapping and killing in the area.

However, OC Omar Ali of Rowangchhari upazila said the drives are on to nab the criminals.