Home » Breaking News » Only the Army Camp : the Sanctuary for the Persecuted People in Chittagong Hill Tracts 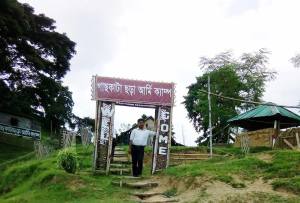 Tt is near about 05:00PM. A boat was anchored on the shore of Gaskata Sara Army camp. A Chakma teen of seventeenth years old flopped down on the mud to come out of the boat shouting “Help, Help”. Along with this girl, her mother also came out of this boat. This girl came to take shelter in Army Camp after being persecuted by Parbattyya Chhatra Parishad (PCP). Soldiers of the army gave her cooperation taking assistance of law, listening all over grievance of the girl. Then, the girl as a victim filed a case in Bilaisori Thana upon persecution over her.

In Chittagong Hill Tracts area, Army Camps are more effective than Thana-Police to ensure the security of the oppressed people. Any sect of exploited community either Hilly people or Bengali considers Army Camp their center for safety and security in this hillside. People take essential cooperation from army in any case of their problem. We have lucidly been informed from the locals of this while we visited the area physically.

May 19, 2016, a hilly girl was bitten by some terrorists of Parbattya Chatra Parishad (PCP) when she went to the shop owned by a Bangali for photocopying the mark sheet. Then, this group of people took her in a jungle and harassed her. They took away cloth from her body and made video in mobile phone. It happened at the Bilaisori Upazilla in Rangamati.

Just after this nasty event, this beleaguered girl came forward to the army camp located in Gaskata Sora in order to achieve asylum from the miscreants’ barbarism. Locals testified that members of army assured all-out cooperation for this girl who was assaulted. Later a case was filed in Bilai Sori Thana under the law of violence against women. The case filing number was 1 (5) 16. The case was filed against Shunitymoy Chakma, Krishnashur Chakma, Pulak Chakma, Sujay Chakma, Manik Chakma, Bir Uttam Chakma, Nenshon Chakma including 15/20 numbers unknown people. But police was able to arrest one of the criminals of this case. Rest of them seems to have afar capture.

In this case, the O.C of Bilai Sori Thana stated that a case has been filed. Victim herself has been the plaintiff. An accused have been detained. Till now, we have not been able to arrest rest of the criminals. Till now, hillside people don’t seem Thana-Police as their safe shelter in this area. It was focused by the statement of a police officer who said that we receive myriads of information about the misconducts including toll collection against hilly organizations.

But most of the people keep silence to admit the matter even confidentially to the law enforcement body. Here the reality is different so as to not to file a case though transgression takes place. Similar statement is given by Karbari Aungchakhi that people of this region all the time has to pass time with tremor because terrorists kill people in the daylight. These groups also collect toll from every house of this area.

General people thus suffer from the repression of these terrorist groups. Despite this suppression, people are to keep silence. People don’t also dare to complain to Thana against their misdemeanors. People know that they will be harassed if they complain against those scoundrels. And police won’t be able to protect the general people who will complain against the criminals and these people will have to face melancholic consequence for the next. But we are, in fact, safe due to the installation of Army Camp in hilly areas.

The locals of Chittagong Hill Tracts (CHTs) informed that Bangladesh Army has been playing an important role to protect the integration of Parbattya Chattagram. The contribution of army is immense to develop the life-style of tribal people and create non-communal brotherhood among different races and groups living in hill tracts areas.

On the other hand, from the aftermath of our liberation to present, the hillside people have essentially been remained safe from the murder, disappearances, abduction, rape of women triggered by tribal miscreants as army has been playing a crucial role to ensure the welfare of the people.

The local people also stated that Bangladesh army has made the communication system convenient to the people through making roads, bridges in the fiddly zones of hills. This army contributed to the development of life-style, educational system, housing system of these rearward tribes and to bring a revolutionary change in the cultivation of these tribal people, the role of army is predominant.

One of the inhabitants of Shajek Union, Shaita Lushay said that the members of Bangladesh army have made a tourism center at Shajek region in Rangamati. People’s life-style of this area has been developed day by day for establishing this tourist center. But terrorists at times come to collect toll from the people. These terrorist groups fear only the army. The absence of army will make their lives insecure and be very difficult to live, as he said.