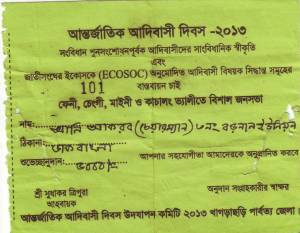 Around eight thousand members of three regional groups are active in Chittagong Hill Tracts (CHT), which consists of three districts — Rangamati, Khagrachhari and Bandarban. The CHT comprises just a tenth of the country’s territory.

The extremist groups and their wings have collected huge quantities of sophisticated foreign arms and ammunition through smuggling for illegal toll collection.

Intelligence sources said there are 2,000 armed members of three local groups involved in illegal toll collection. Of them, 750 belong to UPDF while 900 belong to JSS-Santu and 350 JSS (reformist).

“Either hill people or Bengali, if you have business or job in the hills, you have to pay extortion to three regional groups. Extortion is open secret in CHT,” said a source.

Sources said people have to pay extortion to the armed cadres if they get involved in any kind of earning.

People fear they might become victims of violence, abduction, sexual harassment and killing if they refuse to pay extortion. The groups have unofficially fixed different rates of toll collection depending on business and professions.

According to locals, JSS-Santu collects toll at 10 percent rate on sale of each cow or goat while UPDF and JSS (reformist) charge Tk 150 to Tk 200 for each cow and Tk 100 for each goat.

A professional fisherman pays Tk 45,000 to Tk 50,000 annually to JSS-Santu, JSS (reformist) and UPDF respectively. Other people also have to pay according to the list of subscription.

The separatist outfits collect toll and donation from individuals on the eve of social and religious festivals. Apart from the Bengalis, hill people also have to pay extortion regularly. 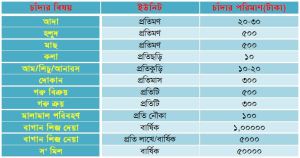 For each bunch of banana, a farmer pays between Tk 6 and Tk 10 to JSS-Santu, JSS (reformist) and UPDF respectively.

District administration and local sources said UPDF, JSS-Santu and JSS (reformist) control every development work in CHT. A contractor has to pay 10 percent in advance against the total amount of work order.

The fund is used for purchasing arms and ammunition, military training and paying salary and perks to members of the groups. Sources claimed that the extorted money is the lifeline for the anti-Bangladesh campaign at home and abroad.

Law enforcers have managed to nab a number of extortionists round the year. But the illegal toll collection continues unabated.

Talking to daily sun, some people of the hill districts said it is impossible for them to live without paying extortion to the armed cadres of the extremist groups.

On August 10, joint forces arrested a toll collector along with three firearms and 18 rounds of bullet from Lakshmichhari upazila of Khagrachhari. They also seized toll collection slips and money.

On December 12, miscreants destroyed 82,000 pineapples at an orchard of a Bengali family in Naniarchar upazila of Rangamati.

On August 1 in 2015, miscreants destroyed 2 lakh pineapples at an orchard in Baghaichari upazila of Rangamati.

Superintendent of Khagrachhari Police Md Majid Ali said, “The law and order is well in Khagrachhari.”

“We have arrested a number of extortionists. Sometimes, we seized slips, which they provided during toll collection,” he added.

He said, “People have to come forward to stop extortion. Without their help, we can’t stop this. For this, people need to inform us when anyone demands extortion from them.”

Another law enforcement official on condition of anonymity said, “People don’t want to inform the law enforcers about extortion. They [people] fear that they might become victims of violence, abduction, sexual harassment and killing if they refuse to pay extortion to the groups.”