Name of anti-Lib force not changed in Rangamati 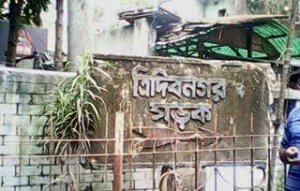 Reza Mahmud :
A road and a place named after anti-liberation force late Chakma Raja Tridib Roy in Rangamati district town have not been changed yet frustrating the locals.
On December 6 last year, the High Court asked the government to remove names of anti-liberation elements from all the installations in the country including educational institutes within 60 days.
Following the High Court order, authorities concerned already removed the names of anti-liberation elements from the different installations across the country but the road and place named after Tridib Roy, have not been changed.
As a result, the locals continued to put tremendous pressure on the district administration to rename the Tridib Nagar area and the Tridib Nagar Road.
Leaders of different political parties and socio-cultural organisations including Parbatya Somo Odhikar Forum, Parbatya Bangali Chhatra Parishad of Rangamati district formed human chains, staged demonstrations and submitted memorandums to the deputy commissioner demanding immediate removal of Tridib Roy from the road and place.
But their all efforts went in vain as the district administration has not taken any initiative to rename the road and the place.
When contacted Mohammad Manzarul Mannan, Deputy Commissioner, Rangamati district, said that they are collecting information about Tridib Roy whether he was involved in anti-liberation activities during the war of independence.
“We are compelled to execute the High Court’s directive. But we need sometimes to know about late Tridib Roy,” he said.
When contacted Feroja Begum Chinu, a local ruling Awami League law Maker, said the Chakma Raja Tridib Roy had helped the Pakistani occupation forces during the Liberation War.
“Even, staying in Pakistan he used to hatch conspiracy against our country until his death,” she said, adding local people do not want to see his name anymore.
According to locals, Chakma Raja Tridib Roy fled to Myanmar from where he went to Pakistan when the country achieved the long- cherished independence on December 16 in 1971.
Source- The NewNation