Home » Breaking News » Propaganda in Chittagong Hill Tracts: The Other Side of the Coin 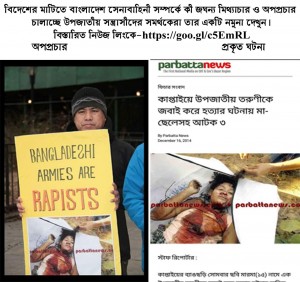 ‘Rights groups accuse Bangladesh army of covering up sex assault’, a friend of mine shared this news with me yesterday. It was published in Al Jazeera on 28 February 2018.  Referring a good number of locals, eminent personalities and government officials including members of security forces, the news has manifested how a sexual assault has been covered up in Chittagong Hill Tracts (CHT) in Bangladesh. Displaying pictures of the procession, it has also narrated how the ‘ordinary people’ have taken the street demanding justice.

Going through the news, I have realized that the Tribal along with a group of intellectuals in Bangladesh has gained startling ability for winning hearts and minds – both at home and abroad. In doing so, they are posing as benevolent, secular and dedicated to women’s right.

The news has portrayed Chakmas as “the country’s persecuted population”. It has oriented CHT as “the site, for decades now, of a low-intensity conflict between the region’s 13 ethnic minorities on the one hand and Bangladesh’s armed forces on the other hand.” Quoting local witnesses, the news also termed the implementation of a court order to hand over the victims to their parents as ‘force abduction.’ It has introduced Yan as a female member of Chakma population “who has been fighting for the rights of ethnic minorities.”

See more on this issue

By now, you must have started pondering over the fact that who would term Chakmas as the persecuted population, who would say that there is a low-intensity conflict between ethnic minorities and armed forces of Bangladesh and who would label the implementation of a court order as an abduction? There is no surprise if Yan Yan is considered as Chakma by them! So, I reckon, one does not need super IQ to understand that the aforesaid news is showing you only the one side of the coin. Therefore, with my limited knowledge on this issue which I have gathered from open sources, I don’t dare to prove what actually happened on 22 January.  However, utilizing the available information especially with the periodical updates provided in some social media (mostly from Tribal); it is not difficult to say how the readers have been misinformed by this particular news.

Throughout the news, the correspondent has referred Yan Yan, right activist and some prominent citizens of the country who all are already branded for their overt inclination to certain quarters. Consequently, there is a mixture of lies with truth as well as a limited hangout and even completely false information in some cases; which are designed to manipulate the reader at the national level by supporting false conclusions.

For any sexual harassment, the parents are the one who is supposed to take their children to hospital and lodge complaint to police. In this case, the scenario is different. It is imperative to let the reader know why parents did not get them admitted to hospital or why they did not go to the police. There is no clue where the girls had been since they left the village in the morning of 22 January and were admitted to hospital in the afternoon of 23 January. No one other than the girls and the ‘unknown’ persons who brought them from their village to the hospital, know what happened to them in that 30 long hours and what was their motive to get these girls admitted in the hospital? Therefore, it becomes obvious that either intentionally or unintentionally, instead of complete truth only part of the truth has been revealed while presenting it as a whole.

Though there was a court order to hand over the girls to their parents, yet the correspondent has termed the implementation of a court order by police on 15 February as ‘force abduction’, just referring the locals. Citing pending appeal, the validity of the court order to hand over the girls to their parent has been questioned. Yet, the steps of Yan Yan to resist the police who otherwise were implementing court order was not even criticised. The motive of Yan Yan to take custody of the girls instead of their parents and thus violating court order is never questioned. It could be only because the correspondent went to either the supporters of Yan Yan or her sympathizers only; not too common people. Thus it makes sense of this one-sided story ignoring other relevant issues and missing of other information already available such as news on medical report mentioning there was no evidence of rape found.

It appears that the correspondent blindly believed Yan Yan and some group of people who are her supporters/sympathizers while working on this issue. He might have under some kind of compulsion to not to present the real truth but to mix some truth and observation with false conclusion and lies. Therefore, the voice of the parents was kept low throughout. To my utter surprise, it is not mentioned that the parents claimed openly in a press briefing that their girls were not raped. In fact, throughout the news, the claim of the parents was given less importance and thus never focused appropriately; could be to deceive the mind of ordinary readers. Instead, the statement of ordinary locals and even parents of the victim, the activists were given more importance. Thus, somehow, it generates feelings that the correspondent might have some sort of affiliation with them. Besides, instead of finding the real story he might have devoted himself to build a heroic image of Yan Yan.

I have got the greatest shock of the news once the younger brother was referred. As claimed by the correspondent, “Interestingly, the little brother present in the press conference said in Marma language that “not one, but two men, entered the room”. Whereas the video clip uploaded by the Tribals displayed the subtitle of what the boy was saying as ‘একজন’ means ‘one person’; please remember it was ‘one person’. This video with subtitle was uploaded to a Facebook page which is well known for its anti-Army propaganda activities. Yet, the correspondent mentioned ‘two men’.  How could he? Somehow, it indicates that the news itself could be an effort of disinformation and propaganda by the Tribals.

For any victim, it is essential that she gets treatment in a hospital. But Yan Yan, from the beginning, was trying heart and soul to take both the girls in her custody. This fact failed to raise any suspicion to the correspondent. The correspondent also found it true that “members of the armed forces put the entire hospital under surveillance and barred outsiders from entering it.” Whereas, Amnesty International, as mentioned in the news, was in ‘possession of a letter signed by the elder Marma sister’ and Yan Yan ‘was present in the hospital that night with another volunteer’. According to the Facebook post of Yan Yan a few volunteers were staying with the girls in the hospitals from the beginning. When writing, “Talking to Al Jazeera, Yan Yan said four men from the security forces entered the Marma family’s home during a dawn raid on January 22”, the correspondent might have forgotten that he already mentioned that ‘two men’ entered the house as claimed already.

As already said before that I am not here to prove what happened, therefore, I would refrain myself from presenting the facts already published in different news media. One thing is for sure that here the facts have been selectively presented, in some cases mixing with truth, and even revealing only part of the truth.  There is no doubt that most of the information provided in this news was either not gathered from impartial sources or not crosschecked from the neutral viewpoint.  Therefore, it seems that it aimed at influencing the attitude of community or people toward some goals as to benefit a particular group of people.

Whether we accept it or not, this news is the testimony of the biggest success of the Tribal in regards to creating confusion about what is true or not. They are successful in proving that “everything is possible in this brave new digital world”, even making the day a night. Exploiting a false allegation which was otherwise crafted carefully by them, they could do what not! They have utilized the power of social media overtly as well as covertly to manufacture the opinion of ordinary people of this country. The fact that “there are lots of people who believe everything posted on the internet is true”, has just made it all the way easy for them.

This event has exposed the biggest limitation of our society in this era of information, i.e. “whatever information that was generally available on the problem of Chittagong Hill Tracts basically reflected one side of the story.” Besides, it has vividly demonstrated that as the Tribal fine-tune their propaganda techniques, security forces are desperately trying to play catch –up in CHT. Thus, it has become imperative that the security forces “must preserve and reinforce the integrity of their ‘informational sovereignty’.”

The truth is precious. But we can bend the truth with our own words. So, we must know that believing something, when we share it or express our views or comment on some online posts; sometimes we all are turning in to a propagandist. Therefore, it is an individual responsibility to differentiate between truth and untruth. We should never forget that.