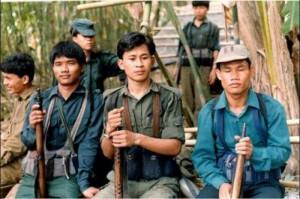 The Member of Parliament from the CHT reserve seat Firoza Begum Chinu said people have to pay hefty ransom to the armed cadres of JSS and UPDF. “The tribal militants have heavy arms and ammunition for that police afraid them, they only fear Army personnel”, she said. She also mentioned that she repeatedly urge the government to rescue them from extortionists and terrorists.

Local people and members of law enforcing agencies said the tribal terrorists are involved all sorts of criminal activities like extortion, kidnapping, assaulting the woman and arms and drugs smuggling. Not only Bengali and tribal people are dwelling become terrorized, but also members of law enforcing agencies very often kept mum fearing the trained armed militants. The government employees in the districts count time to get transfer order for the vicious lawlessness. The fear is so high among the policemen. They often avoid terrorists’ influencing areas.

How the prevailing situation is can be better understood all types of crimes committed in the area but people are afraid of filing case with the police stations. A Bengali national residing at Boangchari of Bandarban said a local PCP leader Kajol Tonjonchga attempted to abuse his wife on June 13, being refused the miscreant fled the scene taking away her gold ornaments. The belittled housewife said she is not so courageous to file case against the miscreant as if she does the PCP may kill her. Taking the attempt to rape cognizance, Sadar union Chairman Chola Mong slapped the criminal in arbitration. Officer-in-charge of Bilaichari Police Station Monjurul Alam said crimes committed but nobody files case. He said in the first six months of the year only three cases were lodged while the number of case was six and two in 2015 and 2014 respectively.

The local politicians said the JSS militants possess firearms, so they are the defacto rulers in the area. Aongchakhai said, “We are living in jungle where police can’t give us protection.” It is mention-able that three cow traders were killed on April 15 by tribal terrorists in Lama of Bandarban. In this connection, police detained a terrorist with arm and ammunition. On June 13, Bandarban AL leader Mongpu Marma was kidnapped at gunpoint by allegedly JSS men. The victim family filed a case accusing 36 JSS men.

Earlier, a retired army man was called at by JSS men and he is still missing. Tribal militants torched a military vehicle after forcefully getting down the military personnel at Sajek of Rangamati. Meanwhile, army personnel recovered huge arms and ammunition after five terrorists killed in a gun battle with on August 15, 2015.  In the same year, three miscreants were killed in a clash between JSS and UPDF militias. Army personnel time to time launch drives to recover arms and ammunition.

People demanded immediate arrest to the killer to Abul Hossain