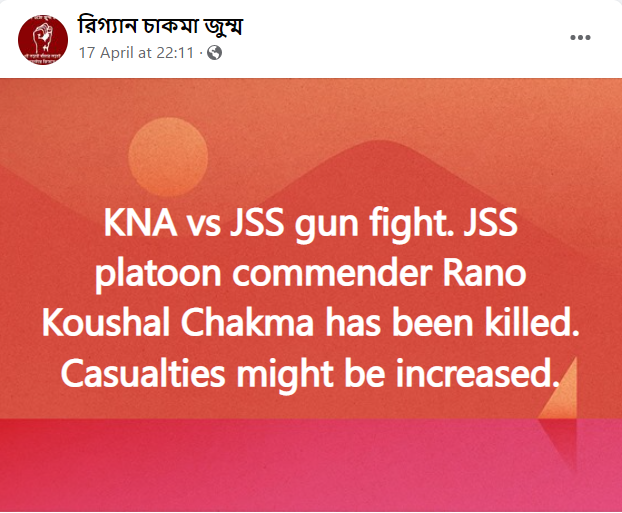 Rumours have been going around social media for the last few days that Parbatta Chattogram Jana Samhati Samiti or PCJSS Military Commander Ranakaushal Chakma has been killed.

On Sunday afternoon, April 17, it was learned that the terrorists of the PCJSS (Santu) were engaged in fierce gunfights with those of Kuki-Chin National Army or KNA, the military wing of the newly launched Kuki-Chin National Front or KNF in the area of Bilpara /Saijam Para (Tanchangya Para) of Barathali Union, bordering Ruma upazila of Bandarban and Bilaichhari upazila of Rangamati. Casualties are said to have taken place. But as the place of occurrence is remote and not easily reachable, no one could immediately come up with any definite information about what actually happened during the firefights. Meanwhile, after learning about these, a team of joint forces rushed to the scene, but they found no trace of casualties there. However, they learned from locals that the gunfights had taken place on the scene resulting in multiple casualties.

Rumours later had it on the social media that Ranakushal Chakma, one of the top commanders and trainers of the military wing of PCJSS, was killed. Though PCJSS has not officially come up with any statement to dispute such rumours, different Facebook IDs supported by them did shrug off such rumours. Rivals KNF, however, claimed on the Facebook page that Ranakaushal Chakma was killed during the gunfight with them. Parbatya News has learnt that one PCJSS commander was killed on the spot while another was shot in the waist. Both of the dead are Chakma tribals. The source, however, could not confirm to Parbatta News whether anyone from KNF was killed or injured during the gunfights.

Meanwhile, pro-PCJSS online news portal Hill Voice reported that the KNF’s armed terrorists had carried out a treacherous attack on the supporters of Chittagong Hill Tracts or CHT Peace Accord, leaving one of the latter dead. Citing local sources, it said the incident took place in the early hours of Sunday, April 17, in the area of Bilpara/Saijam Para (Thanchangya Para) in Barathali Union of Bilaichhari, bordering Ruma upazila of Bandarban and Bilaichhari upazila of Rangamati. The deceased has been identified as Action Chakma. A supporter of the CHT Peace Accord seeking anonymity said the KNF, also known as Bawm Party, carried out an armed attack on PCJSS people without any provocation. Citing local sources, it was also said in the report that a few days ago, some PCJSS activists started their organizational activities in Barathali Union of Bilaichhari bordering Bandarban’s Ruma upazila. On April 16, 2022, they spent night at someone’s house in Bilpara village.

As reported by Hill Voice, around 4:00 am on April 17, the armed members of the Bawm Party carried out a surprise attack on pro-CHT Peace Accord people without any provocation. In the attack, Action Chakma, a PCJSS activist, was shot as he went out for answering nature’s call. He was killed on the spot. An innocent local villager was also injured. A CHT Peace Accord supporter said that it was out of imagination that despite opposing the CHT Peace Accord the Bawm Party would attack them without any provocation. It was unthinkable that the Bawm party would attack another agitating group so soon when it is the government they have to turn to for having their demand fulfilled, not they.

On 18 April, the Hill Voice also stated, the KNF claimed responsibility for the attack on the PCJSS activists and stated through their Facebook account, “The commandos of our KNA’s Hunter Team had been operative all day long since last night”.  The next day, they also similarly stated via Facebook, “Our head-hunter commandos have successfully defeated our rivals PCJSS’s commando force JLA.” Alongside claiming responsibility for the attack, the Bawm Party has also been issuing threats. In another Facebook post, they threatened a fierce Kuki-Chin movement in the hill tracts like in the past in case of going overboard about them.

As for the gunfights, on the other hand, the KNF has made a completely different claim on its Facebook page, saying “the Chattogram Hill Tracts terrorist group JSS’s so-called commando force JLA – as planned by the high command and directed by the JSS (Santu)’s central leaders – came to Bilpara, a Chakma village in Barathali union of Bilachhari police station, in Rangamati in order to attack and annihilate the KNF. It was noon on April 16. Probably they intended to carry out the attack on the KNF base the following day, April 17, when it was Easter Sunday, a Christian festival.

Citing a message from Lieutenant Colonel Solomon, the information, publicity and publication secretary of the KNF, CHT, it was claimed in a Facebook post, “It was learned from a special source that the blueprint of the attack was prepared by the Central Committees of the JSS in Rangamati”. As part of that, the JSS terrorists got a letter sent to the KNF commander by their commander Ranakaushal Chakma through a karbari on Saturday afternoon. The letter mentioned KNF as an organisation backed by the army and brokers of DGFI. It warned that all the KNF members have to leave Bangladesh or face a fight. They all numbered about 40-50, all armed.

Soon after receiving the letter, a squad of 12 KNF commandos, Head-Hunters, went to Bilpara. KNF army entered the area around 3:15 a.m. Meanwhile, KNF member waiting for an ambush was spotted by their rivals and was fired at. Soon after, the KNF commandos took up positions and surrounded the JSS commando force JLA in the shortest possible time and brought the whole area under control, through fierce gun fighting. Some of the terrorists were able to get out of the village in guise of villagers by mixing with villagers using various tricks.

Citing the KNF “Head-Hunters” operations team, it was also claimed in the post that the KNF commandos attacked the remaining terrorists in the village. In a few hours of fighting, 20 of the JLA commandos, including Rankaushal Chakma, a senior instructor of JLA’s course, were shot, fell to the ground and died on the spot. And 20 others managed to flee, also with injuries. The KNF then raided the village and recovered many things including military equipment left behind by the KLA. None from the KNF was killed or wounded. According to a confidential source, several funraising groups of JLA are still operating in Thanchi and Roangchhari.

Several sources close to the law enforcement agencies in the Chittagong Hill Tracts told Parbatta News that incidents of gunfights are true.

They added that they also learned about the death of Ranakaushal during the gunfights, but found no trace of any dead body while conducting a search around the scene.

However, it has been acknowledged in both the conflicting versions of the gunfights that casualties have taken place during the gunfights.

It is to be noted that CHT regional groups have a record of concealing casualties – whenever they can – resulting from gunfights. Often, they go so far as to deny dead bodies if they cannot conceal them. 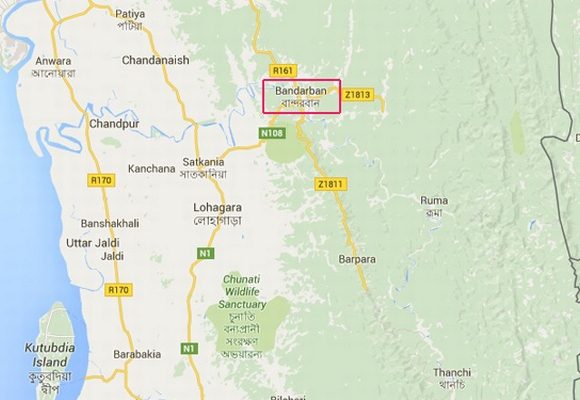 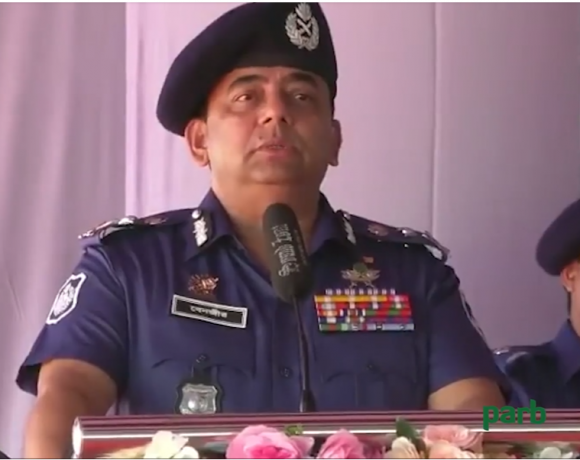