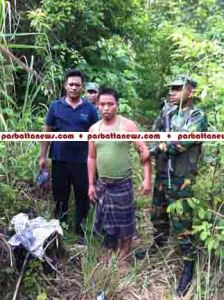 Security forces nabbed Sunil Bikash Chakma(27), a JSS terrorist red-handed on Monday afternoon at Mahalchari in Khagrachari while he was collecting levy money from the locals.

Sources said, on secret information, a patrol team of security forces went to the Badanala near Kiang gate in 5.30 pm and arrested him. He was at that time realizing levy from a banyan-loaded truck. Sunil’s father was late Nihar Bindu Chakma and mother Bristi Chakma. Once they lived Bangamaru village at Langadu upazilla and now posted at Mahalchari for the sake of party activities.

Security forces rescued a mobile set and cash money from him when he was arrested. The arrestee was handed over to Mahalchari police station.