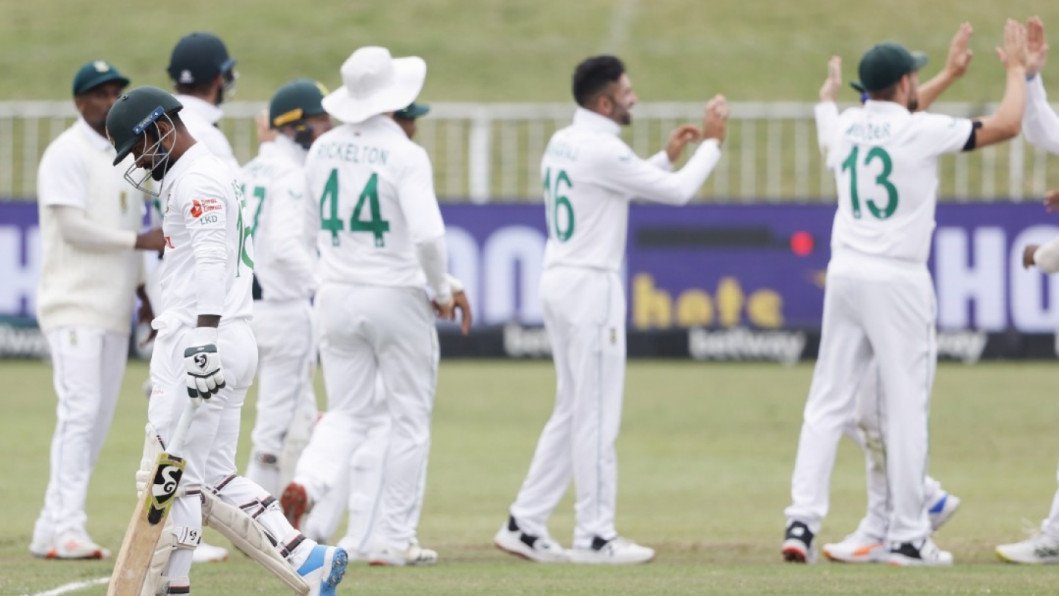 Maharaj caught Bangladesh in spin web to claim 7-32 as Bangladesh were skittled out for just 53, their second lowest total in an innings of Test, chasing a victory target of 274 runs.

No other South African bowlers need to bowl a single over as the two spinners bowled well in tandem to wrap up Bangladesh in a place, which is always well reputed as the land of pacers for its bounce and movement.

Bangladesh were staring at defeat on day four when they were reduced to 11-3. But still there was hope that Bangladesh could put up a huge resistance to make the task tougher for the hosts.

It was not to be as the defeat was further ensured when Maharaj struck in the first over of the fifth day, removing Mushfiqur Rahim for duck.

To make the matter worse, in-form Liton Das tasted a soft dismissal, chipping a delivery straight to Harmer at mid-on for 2 and Bangladesh found them in 16-5, a position which raised the prospect of being all out for the lowest total in Test history.

But Shanto hit a six off Harmer and Yasir Ali found a boundary to reach 26.

The number 26 is the lowest total in Test history, made by New Zealand. So when Bangladesh reached their, the tension was quelled but Bangladesh still need 17 runs to overcome their lowest total, which was 43 against West Indies in 2018.

Maharaj then completed his eighth five-for, rattling the stump of Yasir for 5 and Harmer got rid of Mehidy Hasan Miraz for duck to leave Bangladesh 33-7.

Against the play, Taskin Ahmed struck a massive six off Maharaj to ensure Bangladesh wouldn’t be bowled out for their lowest total.

Maharaj then came back in style to remove Taskin and last batter Syed Khaled Ahmed in consecutive two overs to wrap up the things. Bangladesh were able to play just 13 overs or in little over 30 minutes in the day before being bowled.

Bangladesh won the toss in the match and asked South Africa to bat first. The hosts were elated to bat first and posted 367. Bangladesh, however, were bowled out for 298 in the first innings to concede a 69-runs lead, which made the eventual difference.

The second and final Test will be held from April 8-12 at Port Elizabeth.